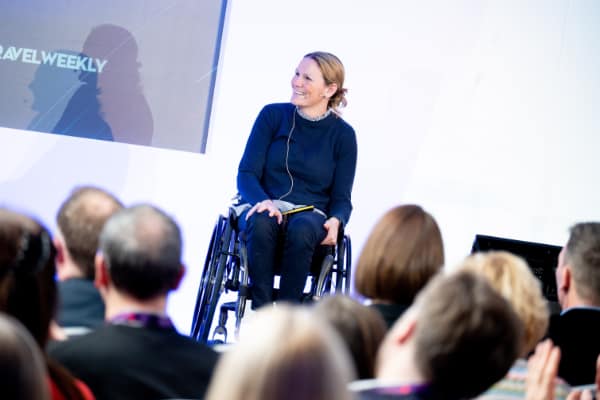 Claire has overcome adversity and turned her life around showing what can be achieved with the right attitude and approach.

With adaptions to a motorbike, Claire has obtained her motorcycling race licence and rides on the track as well as taking on charity challenges.

In 2022, Claire qualified as a pilot, flying an adapted microlight.

Claire’s fundraising challenges have now raised over £850k to help cure paralysis.
She has become one of the world’s most inspirational women.

Many doors had slammed closed, and it was difficult for Claire not to dwell on all she had lost.
If she was going to move forwards, she needed to dig deep to find the strength, determination and courage to rebuild her life. She did just that- to an unforeseeable and extraordinary degree.

Claire had a career as a chiropractor and she had just reached the highest level in the sport of eventing, when a collision with a tree in 2007 left her with catastrophic injuries.

She dislocated her spine, fractured her neck and ribs, punctured a lung and was fighting for her life in intensive care.

The dislocation resulted in severe spinal cord damage and Claire became paralysed from the chest down.

Her life changed in a split second. She went from an active sportswomen whose dreams were coming true and goals were set high to a life where Claire faced huge daily obstacles which ever direction she turned.

The simplest of tasks were now hugely challenging.

As well as losing the use of two-thirds of her body, she was forced to say good-bye to her sport, her career and then her four year relationship ended too.

Claire felt at rock bottom; both her confidence and self-esteem were at an all time low. Not many months after her accident, Claire started to work again, ableit very different to what she used to do and she found enjoyment in a new sport – skiing. Gradually, bit by bit she pieced her life back together.

In 2012, Claire made headline news all over the world as she walked the London Marathon in a pioneering robotic suit.

It took a gruelling 17 days and raised a staggering £220k for charity. The following year, Claire completed a 400 mile handcycle around parts of England, visiting schools on the way to teach hundreds of pupils some valuable life lessons, raising another £85k for the Nicholls Spinal Injury Foundation.

Claire became known as the ‘bionic woman’ as she completed the Great North Run whilst 16 weeks pregnant taking her 5 days, the Great South Run which she walked throughout the night and the Greater Manchester Marathon where she managed to reach the finish line in 9 days, smashing her former record by 8 days.

Why invite Claire to be your motivational speaker?

There are hundreds of motivational speakers to choose from but Claire can offer something that is truly unique and every delegate can relate to it in some way yet it is incredibly powerful.

She hasn’t won an Olympic or Paralympic medal but if there was a medal for not just overcoming adversity but thriving through change then she would have one- and it would be gold.

CLAIRE LOMAS MBE Everyone will face unwanted changes throughout their lives and come up against obstacles which may feel like mountains; Claire shows you that your biggest asset is a positive mindset and shares how you can develop this greatest attribute which will enable you to achieve far more.

She is a specialist at using her life lessons to move audiences.

Claire’s intention is not to just be your motivational speaker for the duration she is on the stage but she wants to leave a lasting impression and help shape people’s future.

Claire also talks openly about mental health, not only how she turned the corner following a catastrophic injury but the journey she has been on with her husband, Dan, after he was diagnosed with severe OCD.

She powerfully explores the difficulties and complexities of mental health illnesses from both prospectives, and how their approach to recovery was very different.

Dan has been a key member of Claire’s challenges and supported Claire during some of the devastating days in the early days post injury but then roles reversed and she helped Dan. Although there were times where their marriage has been hanging on by a thread due to the impact of a mental illness, this has been team work at it’s best.

Diversity and Inclusion is another theme Claire is passionate about.

Developing a culture where disabled people feel included, valued and supported is certainly advancing but there is room for improvement.

It is through the various adaptions and inclusivity that Claire has this incredible story to share; she can fly or ride a motorbike without even looking like she has a disability and complete marathons with the mass participants yet the most basic of tasks can still be a struggle, such as using public transport or entering a building.

Claire can tailor her presentation to include the positivity that diversity and inclusion can bring as well as the unconscious bias against those with a disability.

Unconscious bias against disabled people appeared to be higher than any other social group, in fact one in three people tend to think of disabled people as not as productive as everyone else.

Claire’s session will help people see past a disability.

‘Diversity is a fact and Inclusion is an act.’