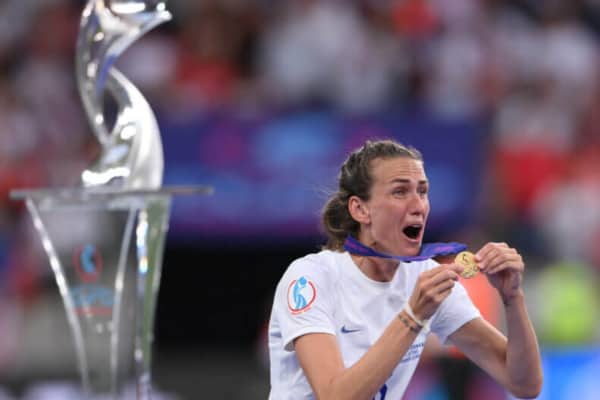 Tyne and Wear born and raised Jill was a keen long-distance runner, winning the North of England Under-13 cross-country title and the Junior Great North Run, whilst playing football for Boldon Girls.

At age 13, she had to decide between football or running and chose to concentrate on playing football.
After leaving school in 2003, Jill studied Sport and Exercise Science at Gateshead College and played football for the college team.

After completing her diploma, she enrolled at Loughborough University to study sport and began her senior career with Sunderland Women. #

In October 2005, aged only 18 years, she won the Women’s Player of the Month award, based on her performances for both her and club and also her country (at under-19 level).

Jill departed Everton, to sign a two-year deal with Manchester City and played a big part in the team securing the Continental Cup Trophy in 2014.

In June 2020, she signed a new two-year contract which saw her take up a coaching role as well as two spells on loan at Everton and Aston Villa.

Jill’s first call-up to the England senior squad came in May 2006, having captained the Under-19s side for the previous 18 months. She made the squad for the 2007 World Cup, coming on as a substitute in England’s opening match against Japan.

In May 2009, Jill was one of the first 17 female players to be given central contracts by The Football Association.

She was then named in Hope Powell’s squad for the 2009 UEFA Women’s European Championships, scoring a late winner as England beat the Netherlands in the semi-final.
In June 2022 Scott was included in the England squad which won the UEFA Women’s Euro 2022.

Jill was appointed an MBE in the 2020 New Year Honours for services to women’s football and is an accomplished public speaker.

Jill also owns a Coffee Shop in Manchester which she runs with her partner.

She was brilliant – very genuine, rich content (great answers) and just so composed too – what winning style.

I think everyone was starry-eyed after she had finished speaking and she was so generous with her time in talking to members of the audience, especially those who have daughters who play football. One very seasoned business person in the audience said that she was the best speaker he had ever heard.