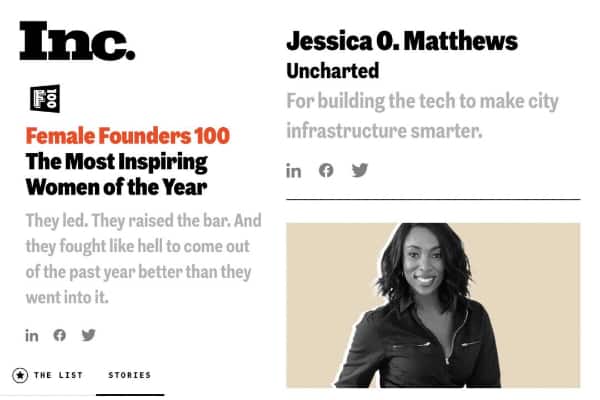 Founded award-winning power and data infrastructure tech company at just 22 years old
Listed on over 10 patents and patents pending, including her first invention of the SOCCKET, an energy generating soccer ball

Recognized as Fortune’s Most Promising Women Entrepreneurs, 30 Under 30 list for Forbes and Inc., and Scientist of the Year by Harvard University

Inspires audiences to use innovation and tech disruption to power the needs of people, businesses, and communities worldwide

Jessica O. Matthews is an award-winning entrepreneur, inventor, and social scientist with more than 10 years of demonstrated thought leadership in the future of smart cities, climate resiliency, and improving equitable access to infrastructure resources.

She is the founder and CEO of Uncharted, a sustainable infrastructure company that helps cities reduce the cost of developing smart infrastructure worldwide.

Through Uncharted, she has created a central hub that connects cities to innovative, cost-effective solutions essential to transforming their environments to be more intelligent and inclusive, while leveraging data to achieve the highest level of infrastructural operation and optimization.

Called “the Elon Musk of kinetic energy” by former U.S. chief technology officer Megan Smith, her groundbreaking research and career center around the intersection of disruptive technology, renewable energy, human behavior, and the psychology of self-actualization.

Represented by Leading Authorities speakers bureau, Jessica takes groups along her entrepreneurial journey as she reveals the evolution of an idea to generate energy from a soccer ball all the way through to the rise of a revolutionary technology company that is reshaping our cities for sustainable futures.

Her candid, relatable approach inspires audiences to adapt, innovate, and create solutions to address the needs of people, businesses, and communities worldwide.

Jessica’s motto, “Succeed, not despite of who you are, but because of who you are, unapologetically,” encourages individuals and organizations to embrace differences and recognize that personal struggle and challenges can give birth to solutions, if you let them.

Jessica’s career started at the age of 19 with her invention of the SOCCKET, an energy-generating soccer ball.

At the age of 22, Jessica founded Uncharted as a power solutions company before expanding to smart city infrastructure development that helps the citizens of small cities trust that they do not need to “leave where they are from to get where they are going.”

Jessica’s success in entrepreneurship led to a White House invitation from President Barack Obama to represent small companies for the signing of the America Invents Act in 2012.

In 2016, she raised what was at the time the largest Series A round ever raised by a black female founder in history, and was selected to ring the NASDAQ opening ceremony bell, representing all Forbes 30 Under 30 alumni.

In 2021, Jessica was officially appointed by Secretary of Energy Jennifer M. Granholm to the Electricity Advisory Committee.

As a member of the Smart Grid subcommittee, she plays a key role in advising the Department of Energy on the ways we can modernize our nation’s electric delivery system, specifically focusing on accelerating the deployment of electric vehicle charging stations throughout the U.S.

A dual citizen of Nigeria and the United States, Jessica has a degree in psychology and economics from Harvard University, an MBA from Harvard Business School, and is listed on over 12 patents and patents pending.

She has appeared on the cover of Forbes and Forbes Africa, as well as featured in Marie Claire, Wired, Inc., TechCrunch, The New York Times, and Fast Company, among others.

Join Jessica as she shares how an energy-generating soccer ball launched a global power and data infrastructure company, the trends she believes will drive the industry in the next decade, and the role

Uncharted Power’s disruptive innovations will play in this new ecosystem.
Innovating During Times of Uncertainty: Adapting Your Business for the New Normal

The business world has transformed tremendously in recent times. Execs are forced to rethink how they operate, what they offer employees, and their greater long-term impact on society.

But what does the current business landscape look like for smaller companies?

Uncharted Power is a venture-backed small business in the niche power infrastructure space – if you subscribe to the theory of intersectionality, the nature of their business stacks all odds against them. But CEO and founder Jessica O.

Matthews is using this time to breed new vision for her company.

If you’re exploring innovation and adaptation for your business, Jessica will share how Uncharted Power has pivoted in the new business world by doubling down on their mission of redefining power access and building smarter, safer cities.

Innovating During Times of Uncertainty: Turning Adversity Into Vision

Business and government leaders hold an important role in coming together to create solutions that enhance the lives and health of marginalized citizens, but it is particularly exciting when small businesses within these communities led by members of the marginalized group feel empowered to take action.

One company working toward closing the gap is Uncharted Power, a data and power infrastructure startup creating tech to support these very communities. Jessica O.

Matthews, a black female founder and CEO, chose to build her company in Harlem to encourage diverse decision-making and uplift the surrounding community.

In this talk, Jessica will discuss: