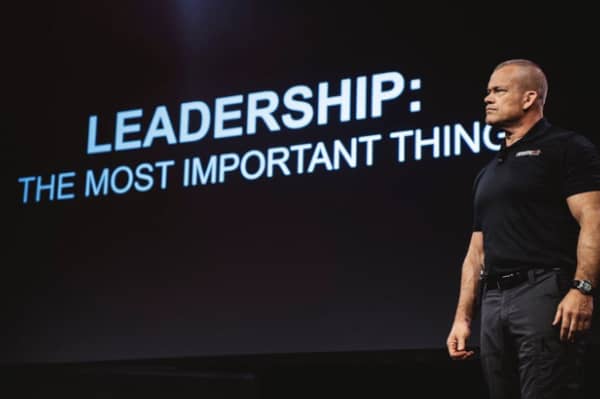 Jocko Willink is a decorated retired Navy SEAL officer, author of the book Extreme Ownership: How U.S. Navy SEALs Lead and Win, and co-founder of Echelon Front, where he is a leadership instructor, speaker, and executive coach.

Jocko spent 20 years in the U.S. Navy SEAL Teams, starting as an enlisted SEAL and rising through the ranks to become a SEAL officer.

As commander of SEAL Team Three’s Task Unit Bruiser during the battle of Ramadi, he orchestrated SEAL operations that helped the “Ready First” Brigade of the US Army’s First Armored Division bring stability to the violent, war-torn city.Task Unit Bruiser became the most highly decorated Special Operations Unit of the Iraq War.

Jocko returned from Iraq to serve as Officer-in-Charge of training for all West Coast SEAL Teams.
There, he spearheaded the development of leadership training and personally instructed and mentored the next generation of SEAL leaders who have continued to perform with great success on the battlefield.

During his career, Jocko Willink was awarded the Silver Star, the Bronze Star, and numerous other personal and unit awards.

In 2010, Jocko retired from the Navy and launched Echelon Front with Leif Babin where he teaches the leadership principles he learned on the battlefield to help others lead and win.

Clients include individuals, teams, companies, and organizations across a wide-range of industries and fields.

Extreme Ownership: Leadership is the Most Important Thing on the Battlefield

Battle-tested concepts of combat leadership that directly correlate to all leadership situations on and off the battlefield.

We don’t teach theory learned in a classroom. We teach tried, tested, and proven combat leadership principles and strategies learned on the front lines of the war on terror.

The key to effective leadership is balance.

Leaders will constantly be faced with opposing forces that must be balanced in order to succeed.

We discuss how to identify and constantly make adjustments to those opposing forces to lead every member of your team effectively.

The Laws of Combat: Dominate Your Battlefield, Lead & Win

The laws of combat were learned on the battlefield of Ramadi, but they apply everywhere. Whether in business, personal, or life implementing the four laws of combat are required to succeed.

Cover and Move, Simple, Prioritize and Execute, and Decentralized Command: these are the laws that lead to winning.

Although combat is different from any other environment in the world, the traits and qualities needed to succeed are exactly the same.

The presentation will focus on leading in dynamic situations. Simple and direct, yet simultaneously strategic and diplomatic, these leadership concepts are designed to get your team executing at the highest level possible.

Take advantage and implement the lessons learned from the harshest teacher: war.

At Echelon Front, we preach a Default Aggressive mindset.

But being aggressive while solving safety and risk issues requires a solid foundation and understanding of why we do what we do.

We discuss the benefit to establishing Standard Operating Procedures (SOPs) for all of your team.

Then we teach how to take aggressive actions to mitigate risk and fix problems before they do damage.

Mission Planning: How the Military Planning Model Applies to Business

Designed to create alignment across your entire industry, the planning process is critical to create understanding, buy-in, and commitment to mission accomplishment.

We teach the military’s approach to mission planning, then conduct training that shows how it applies directly to you and your team.

We culminate with exercises specific to your needs and establish the process and path toward setting a vision and accomplishing your mission.