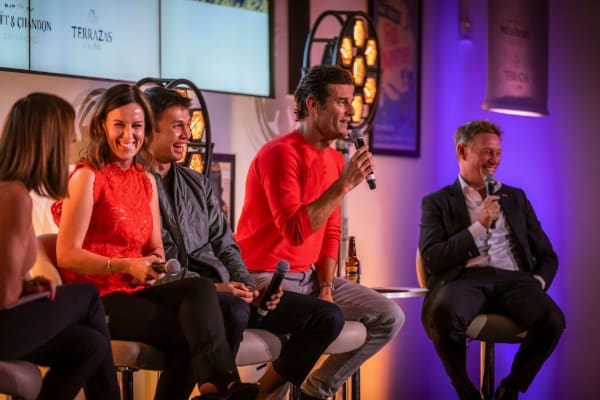 Fun, feisty and fearless, Natalie is the F1 pitlane reporter for Sky Sports F1. Previously pitside as reporter for BBC radio 5Live, she is also known for hosting Police Interceptors on Channel 5, and as a regular panellist on The Wright Stuff.

Natalie has filmed a documentary for C5 ‘Finding Mirela’ in Romania, when she revisited the country in search of an orphan she had first met on a charity trip 11 years earlier. This was a life changing, emotional and at times scary journey.

Natalie co hosted the Goodwood festival of Speed with Steve Ryder for ITV4.

She hosted Feel Good Friday on Heart 106.2 and presented David Beckham’s Soccer USA from the US for the Fox Soccer Channel and Five. Natalie has taken part in Dancing on Ice.

Natalie is also a poker enthusiast; and started out in front of the camera by hosting the British Poker Open, the World Cup of Poker, and a ‘How to Play Poker’ DVD for Virgin Games.
She also enjoys penning interviews with some of the world’s top poker pros.

It was confirmed on 13 January 2011 that Pinkham was to join BBC Radio 5 Live’s Formula 1[9] commentary team as a pit lane reporter for the 2011 season – a role she took up beginning with the 2011 Australian Grand Prix.

In December 2011, it was announced she was working for Sky Sports covering the 2012 F1 season. Her main role for the 2012 season was pit reporting throughout the practice sessions, qualifying and the race alongside other commitments like interviews.

For 2013, she replaced close friend Georgie Thompson as host of The F1 Show and over following years has become a key member of the Sky Sports F1 team.

In 2021, Pinkham became the first woman to commentate on a Formula One session on British television when she led Sky’s commentary of first practice at the 2021 Bahrain Grand Prix, working alongside Karun Chandhok and Jenson Button