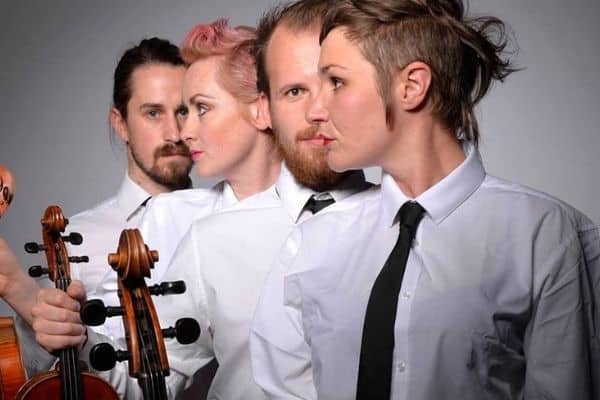 Bowjangles are a multifaceted music- comedy sketch group, made up of four classically trained musicians.

Quirky, sexy, hilarious and completely unique, they offer an incredible eccentric Vaudeville style performance, like nothing you have seen before.

If you like music, song, dance and comedy, you will love Bowjangles. This multitalented four-piece not only play their
instruments superbly; they also sing, they dance, they leap, tumble, juggle and joke, leaving their audience in
stitches of laughter – and incredulous.

Bowjangles use every style and genre of music you can imagine in energetic and hilarious stage shows which takes
string quartet performance to a whole new dimension, and brings old style Music Hall Vaudeville into the 21st
century.

Based in London, Bowjangles have travelled the world with their unique brand of performance, being invited to
entertain the masses from Brisbane to Barbados, Norway to the Outer Hebrides performing mainly in halls, theatres and at Arts festivals- however they have also been known to perform on boats and in barns, hospitals, castles, nightclubs, schools, in the middle of roads, in a forest at the dead of night. They now perform in halls and theatres, for private events and festivals.