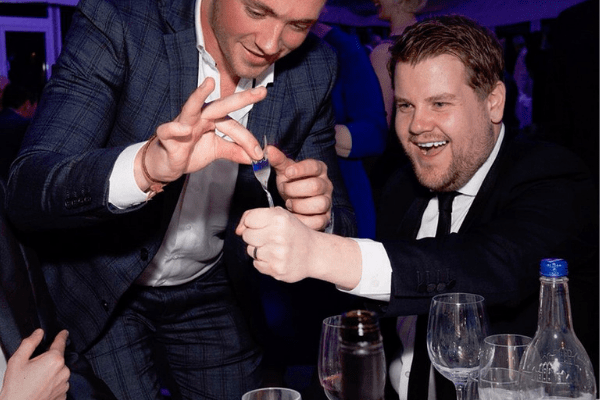 Now 25, Maximilian is recognised as a World-Class artist, with bookings all across the world from London to Dubai, Los Angeles, Cannes and beyond!

PERFORMING CAREER
AFTER TWO YEARS AT HAMLEY’S MAXIMILIAN LEFT to BECOME A FULL-TIME PROFESSIONAL MAGICIAN.
over the last 5 years he established himself as one of the top magicians in the country performing at events all across the uk and worldwide.

THE MAGIC CIRCLE
formed in 1905, THE MAGIC CIRCLE IS AN EXCLUSIVE MEMBERS CLUB FOR MAGICIANS IN LONDON, it includes MEMBERs such as david blaine, derren brown, dynamo and even HRH Prince Charles. when maximilian was 19 he applied, then AUDITIONED and got accepted into THE MAGIC CIRCLe as 1 of only 1500 magicians worldwide.

LOS ANGELES
AT THE BEGINNING OF 2018 MAXIMILIAN lived in Los Angeles, California. it was a successful three months of networking and performing at some incredible locations in and around hollywood. A highlight of the trip was being invited to the green room of James Corden’s “LAte late show”, where he met the team and performed a few tricks.