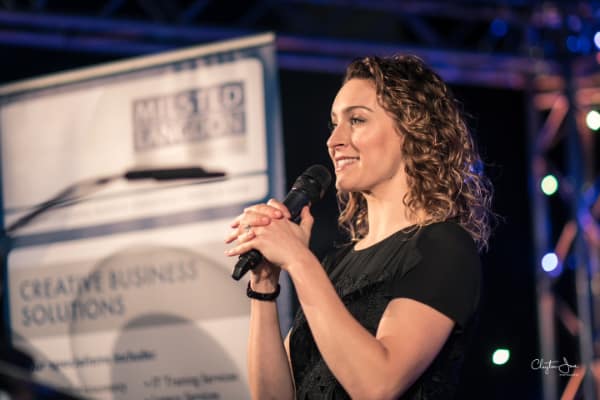 After claiming Team GB’s only Gold medal at the Vancouver Games in 2010 she became Britain’s first solo Winter Olympic champion in 30 years, 58 years for an Individual female, to win Gold.

She has since taken on numerous sporting and broadcasting challenges such as presenting for the Gadget Show, BBC Sport, Ski Sunday, Eurosport, Goodwood and the Isle of Man TT.

Appearing on tv shows such as Alone in the Wild, 71 Degrees North, Tour de Celeb, The One Show, Jonathon Ross, Topgear, A League of Their Own and Question of Sport Numerous times.

Amy qualified for her international co-driving license, competing in the International Wales GB Rally in 2013 and 2016 with Tony Jardine, and having presented on the Isle of Man TT for ITV4 in 2018 to present day, has since got her motorbike licence too.

Amy is a highly engaging and entertaining speaker with lots of experience in sharing stories and lessons from her career as a skeleton athlete as a tv presenter, motivational talker, Ted Speaker and host.

Her knowledge of training and competing on a World Class level for 10 years allows her to do a tailor made talk to whatever your company wants.

She will talk about her own experiences as well as giving an exclusive insight into the high performance level world of sport.

Amy knows what is like to have to self-motivate, set goals, come across setbacks such as injuries, cope with disappointments; using some of these topics she can motivate and inspire any business, sharing many of her secrets to her Vancouver success.

She’s a published Author having written a book for talented athletes, “Talent to Triumph” helping them achieve the next level of performance in their sport.

Now as a mum to two boys, Amy’s passion for fitness is still burning strong , and today she runs her own Personal Training business helping others achieve their fitness goals.

In whatever walks of life, be it sport, business, education or charity Amy is extremely passionate about motivating and encouraging the young and old.

She has given motivational speeches for Lloyds Bank and at several schools’ prize-giving days.

I have opened several events and buildings such as Cardiff White-Water Rafting Centre and several school sports halls and my painted life-size lion (Medallion) was exhibited in Bath’s “Pride in the City” collection of public art.

Amys’ corporate speeches deliver inspiration and ambition by telling her own story.

Highlighting what it takes to be the best in your field but is an emotive story of how she achieved Olympic Gold at the Vancouver Winter Olympics in 2010.

Amy has delivered speeches surrounding ambition, inspiration, teamwork, motivation, dedication, preparation and what it takes to success with a core focus on integrating her success in the sporting field into business success.

Since her Olympic success in 2010 Amy is used to receiving awards, both international and at home in the UK and understands the important recognition that goes alongside receiving an award.

Amy can present awards for various different schemes, from television awards to school sports awards. Nothing gives her greater pleasure then presenting an award to other successful winners.