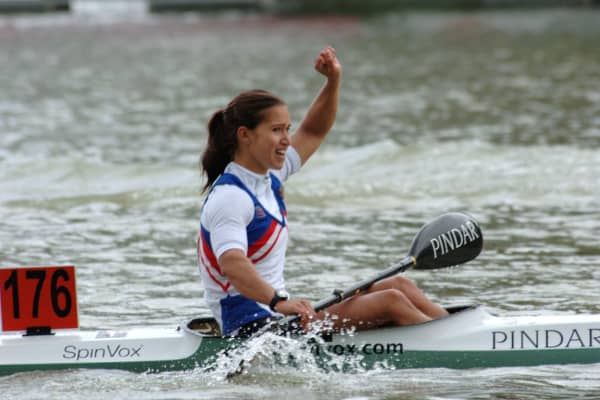 Anna Hemmings is Britain’s most successful female marathon kayaker with a staggering eleven World and European Championship medals, 9 of them gold.

By the age of 24, Anna had been World Champion 3 times and competed at the Olympic Games. In 2010 she was awarded an MBE for her services to sport.

She achieved this success against all the odds…

At the peak of her career, Anna was diagnosed with Chronic Fatigue Syndrome and was told by medical experts she might never race again.

She battled her way to full recovery and went on to win a further 3 world titles and compete at her second Olympic Games in Beijing 2008.

Since retiring from sport Anna has become recognised as a specialist in the field of resilience and the psychology of high performance.

She is an accredited High Performance and Leadership Coach and founded Beyond the Barriers high-performance training consultancy.

Anna has worked across organisations with CEO’s and senior leaders through to middle management, designing and delivering resilience, leadership and high performing teams programmes.

She works globally with leaders and teams helping them develop the skills, attitudes and behaviours to deliver exceptional performance.

Anna’s unique combination of experience in elite sport combined with 12 years leading a successful business and working alongside senior leaders, gives her a broad understanding of the challenges that leaders and teams face and how to overcome them to deliver outstanding results.

Whether it’s building confidence, engaging teams or developing resilient leaders, she is passionate about helping others succeed at the highest level.

In 2007 the University recognised Anna’s achievements and awarded her with an Honorary Fellowship.
Anna lives in South West London with her husband Neil and loves being a mum to their two young children Sofia and Luke.

Anna’s achievements were recognised by various bodies including The Queen, who awarded Anna an MBE in the 2010 New Year’s honours list for services to sport.
In 2001 Anna graduated from Royal Holloway College, University of London with a BSc Honours degree in Economics and Management (2:1).

GETTING THE COMPETITIVE EDGE

Exceptional individuals are not born they are made. Anna’s mission is to provide clients with the key skills and mindset required to succeed at the highest level. In this inspiring speech she reveals the thinking, methodology and techniques she used to become a world champion 6 times and how those strategies can be applied directly to the business world.

RESILIENCE: SUCCESS IN THE FACE OF ADVERISTY

Resilience is a game changer, it’s what will give you and your teams the ability to think clearly and strategically, to make rational decisions and emerge stronger.

Having had her own struggles and overcome adversity, performed under pressure in challenging environments and studied and worked with resilient leaders and teams over the last 12 years, Anna knows how to support organisations and equip them with the tools to boost resilience.

In this inspiring keynote she presents highly effective and practical techniques to ensure you are well equipped to thrive through turbulent times.

High performing teams are finely tuned, they consistently perform at a high level, they achieve outstanding results and it doesn’t happen overnight but with the right tools and mindset it is possible. Anna’s simple, practical and powerful tools are a fusion of the latest research and science of performance together with pioneering principles from the world of elite sport for the development of high performance teams in the business world.

Although Anna didn’t compete in a traditional team sport, she didn’t reach the highest level on her own, when she made the GB Team she was a part of a professional set up with sports scientists, physios, nutritionists and sports psychologists; team work has been a fundamental part of her success. Anna won one of her 6 world titles in the doubles with her partner Helen Gilby and competed at the Olympic Games in Beijing in the doubles too, giving her first-hand experience of what it takes to build a cohesive, motivated and high performing team.

The core of this speech is built around the framework of The Five Behaviors® of a Cohesive Team Model (which Anna is an accredited trainer) and is illustrated through inspiring anecdotes from Anna’s journey in sport and business.

DISRUPTIVE THINKING FOR THE COMPETITIVE EDGE

Disruptive thinking at its core is about thinking differently and in a way that challenges the traditional way of doing things.

At the start of Anna’s career she was told she was too small and didn’t have the right build to be a great kayaker so it was imperative that she found ways to challenge these assumptions and approach training from a different perspective. She discovered that disruptive thinking can produce unconventional training strategies that deliver extraordinary results.

In this speech Anna will use her personal anecdotes to share simple and practical strategies for embracing disruptive thinking and applying it in your life to help gain the competitive edge.

The businesses who thrive through periods of adversity and rapid change are the ones who have resilient leaders who drive them forward. Resilient leaders are more effective under pressure, have the ability to think clearly and make rational decisions in the face of challenge and create opportunities for growth. Using The Resilient Leaders ElementsTM framework Anna will share how you can become a resilient leader. She will take you on an inspiring journey and reveal the behaviours, actions and strategies that leaders need to be resilient and have impact.

Skills based techniques and solutions… We were looking for an event to showcase resilience and to give an empowering message to our employees – Anna’s virtual session wholeheartedly fulfilled this purpose.
She brought a number of skills based techniques and solutions to dealing with challenges and building resilience. It was highly engaging, meaningful and motivational!

Motivating, inspiring and engaging… Anna is a brilliant speaker – the audience was completely engaged, inspired and motivated – I was spellbound.
The feedback from this event was the best I’ve ever had. Anna has the ability to tell a great story whilst making useful connections to business issues.
There were many thought provoking ideas generated and we’re still referring back to the lessons from her story.