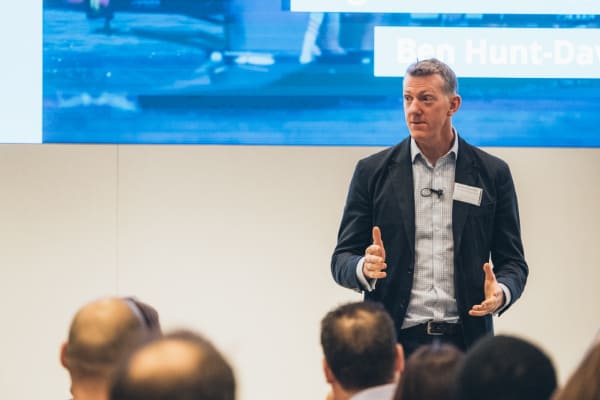 When he’s at corporate events, Ben is known to cover the following topics:

From sub par results, to first place podium finishes, Ben has dedicated his secondary career to evaluating the marginal gains he implemented, that others can replicate, in order to succeed in any ambition.

The seasoned speaker acts as a performance coach to any team or business looking for inspiration, motivation and the tools to create great results.

Throughout the ‘90s Ben was a professional rower representing Britain on the world stage, competing in three Olympic Games during his career.

Whilst his determination, mental resilience and commitment to teamwork had seen him reach the highest competition level attainable in the sport, he was not yielding results with his team.
Impressive to most is the ability to reach the world stage, however, with his heart set on nothing less than gold, the 1992 Barcelona Games, 1996 Atlanta Games and a number of 7th place finishes, did not meet Ben’s standard of success.

Collaboratively evaluating what would make the boat go faster with his team led him to win the 2000 Sydney Olympics Men’s 8 Gold, the first British team since 1912 to manage the feat.

Undeniable in his success, Ben believed the key to it had been his careful reevaluation, and since retiring from professional sports in 2000, he has been dedicated to developing the winning formula to allow others to achieve similarly.

Co-authoring ‘Will It Make the Boat Go Faster?’ in 2011, Ben transformed his first hand experience into implementable strategies for personal and business life, and a year later in 2015 he founded a performance consultancy by the same name.

As director of Will It Make the Boat Go Faster Ltd, Ben offers professional coaching for businesses and individuals on the principles required to focus on, and achieve a goal.

Beneficial for a range of demographics, Ben is revered for his storytelling abilities as a speaker, combining his personal sporting career anecdotes with proven strategies to enhance the capabilities of audiences.

A down to earth and charismatic speaker, Ben is the ideal addition to an occasion.

Just a quick note to say a very big thank you for the fabulous talk you gave at the conference on Friday. Everyone I have spoken to thought your session was outstanding.
Of particular note was the way in which you related your rowing experiences to our theme of the day, something that is often overlooked by many ‘inspirational’ speakers.