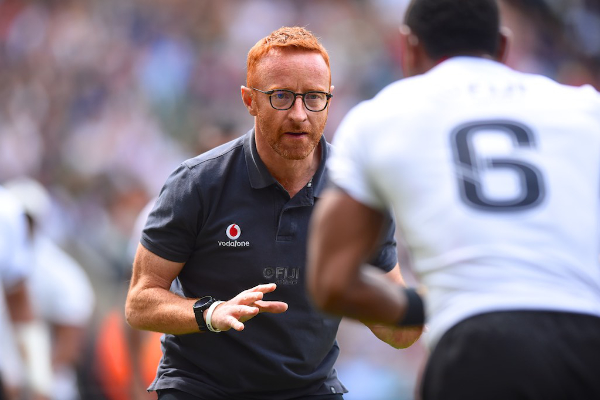 As one of the most successful rugby coaches in the history of the game and the man who took Fiji to rugby sevens Olympic gold in Rio 2016, Ben Ryan’s insights into authentic leadership and high-performance cultures are in demand from corporate leaders and organisations wanting to unlock success through maximising human potential.

Ben’s amazing journey to both a gold medal and a remote island of rich culture and rugby talent is not about sport.

His story is about people and how to unleash the champion mindset within every person, player and team to achieve greatness. Ben’s approach to creating the psychological safety necessary for people to deliver their ultimate best performance became legend for Fiji and continues on today in his engagement with corporations and sporting clubs across the globe.

Ben Ryan, a red-haired, 40-something, spectacle-wearing Englishman, is given 20 minutes to decide whether he wants to coach Fiji’s rugby sevens team, with the aim of taking them to the nation’s first-ever Olympic medal.

He has never been to Fiji.

There has been no discussion of contracts or salary. But he knows that no one plays rugby like the men from these isolated Pacific islands.

In Sevens Heaven, Ben reveals these learnings gleaned from coaching three years at Fiji and makes the connection to the relevance and meaning for mentors, business leaders and organisations.

Ben’s proven approaches to success and achieving audacious goals through aligning vision to values are winning over executives and corporate audiences everywhere.

His frameworks for people empowerment, effective communication and unleashing peak performance are redefining how to develop champion teams and lasting, winning cultures.

Ben Ryan, a man with an audacious plan for Fiji, struck gold… and a plot of land in paradise.

His audiences include leaders and product teams at some of the largest automotive, communications and technology companies in the world;

Ben absolutely hit the right note and our clients loved him! His session brought the day to a brilliant close; so inspiring and uplifting with some incredibly clear and relevant leadership reflections.
It was also so good of Ben to stay behind and chat to all the people – absolutely wonderful!