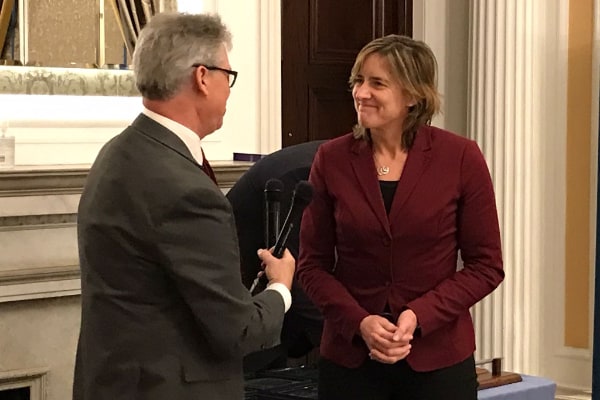 Adept in facing adversity and unimaginable challenges Katherine’s momentous success story speaks to all audiences on the rewards of fierce determination.

The world champion offers insights into leadership, teamwork and the key to success.

Katherine excels when talking of teamwork, overcoming challenges, motivation, winning and the importance of communication.

She tailors her talks to the occasion and takes any requirements needed for her clients into careful consideration.

She has become a figurehead for women’s rowing worldwide.

Born in Glasgow, Katherine’s sporting career began at school and was nurtured throughout her education, until she turned professional. As a member of the GB Rowing squad, she now lives and trains close to the River Thames.

She has received numerous accolades and was named a Member of the Order of the British Empire in 2006.

At Sydney 2000 Katherine experienced her first Olympic success, and her taste for medals was born. Success followed with Silvers in Athens and Beijing, and the ultimate gold on home ground came at London 2012, alongside teammate Anna Watkins, winning the women’s doubles sculls.

In addition to her impressive Olympic success, Katherine is also a 6 times World Champion, and she won a gold medal in the U23 World Rowing championships in 1997 at the start of her record-breaking career.

Uniquely for the sport, she is a world champion in all possible boat classes: the single, double, pair, quad and eight.

In 2012 she was chosen as one of the five athlete ambassadors for promoting the key messages of Team GB – the 2012 Olympic Team. Katherine celebrated the end of a momentous year with a nomination for BBC Sports Personality of the Year. Katherine was awarded a CBE in the 2013 Honours List. 2015 saw her inaugurated as the Chancellor of Oxford Brookes University.

An expert at overcoming challenges in sport and working towards a goal with fierce determination, Katherine is an excellent motivational speaker.

Katherine has delivered many talks for clients who include:

Katherine was one of the very best speakers I have ever heard speak, friendly to all my people and our clients, genuinely interested in other people’s eyes, incredibly authentic.
People were made to feel very special in the presence of a true sporting superstar.
I was completely blown away by her, and that rarely happens believe me!
She has made people think about their lives completely differently and the memory of her words will resonate with me for a very long time.

Katherine’s ability to engage and thrill both a young audience during the daytime and a wider public audience in the evening with her warm style and charisma was marvellous.
Her willingness to spend time answering questions, having her photo taken and sharing her gold medal with the audiences was terrific.
Katherine is an excellent speaker, a true ambassador for sport and a role model – not just for young people but for all.