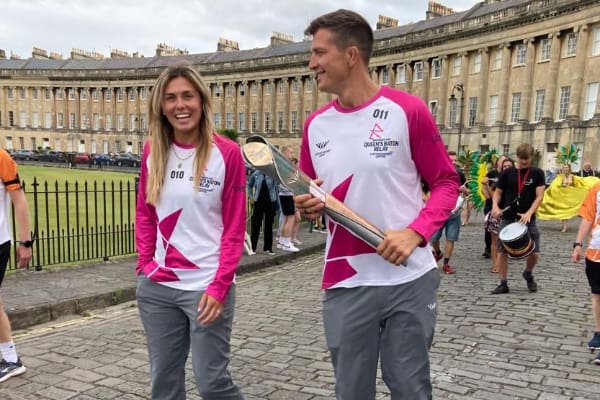 The figurative mountain facing Ed Jackson after the Easter of 2017 was monumental.

Having undergone an operation to repair a fracture dislocation of his C6/C7 vertebrae sustained whilst diving into the shallow end of a swimming pool, he lay, quadriplegic, on his back in ICU with only limited movement in his right arm.

The scale of his recovery was so immense that the experts had warned him he may never walk again, let alone continue to play rugby professionally. His career as his knew it was extinguished and he now faced an uphill battle for his own independence.

However, using the ‘luck’ he felt having come so close to lifetime paralysis as a rallying point, Ed’s positive attitude helped him go from strength to strength in the months after his accident.

Flickers of movement in his big toe in the first weeks were emotional flashes of optimism and reward for his hope and perseverance.

Recovery was now a firm possibility and using his arms in order to power a wheelchair became a priority. What he wanted least of all was to be a burden to anyone. But as he continued to improve, his goals became greater.

He was being driven on by the ultimate motivation – the ability to walk – and beyond that, walk a mile.

Ed had spent much of his former life as a professional rugby player rehabilitating injuries, albeit minor in comparison. But these had given him an understanding of the mental and physical process required to return to fitness. By applying an elite level of focus and work rate to his recovery he managed to achieve astonishing function so soon after an injury of his severity.

The damage to the left side of his spinal cord meant Ed now suffers from Brown-Sequard Syndrome, a neurological condition that results in weakness or paralysis of one side of the body and loss of sensation on the other.

As a consequence, things like temperature regulation and bladder control are made difficult and, most noticeably, he walks with an acute limp.

However, this didn’t stop Ed from plotting something big – so big it seemed impossible – from as early as 4 months on from his injury and after just a few steps without crutches.
With a huge amount of determination these steps turned to metres, those metres into miles, and from miles into peaks.

All this effort and planning culminated in Ed reaching the summit of Snowdon, Wales’s largest mountain, on Easter Sunday 2018 in aid of the rugby charity Restart who had supported him over the course of the year.

But just as importantly, by doing so he succeeded in inspiring all those who are delivered worse-case scenarios every year to prove they aren’t unchangeable.