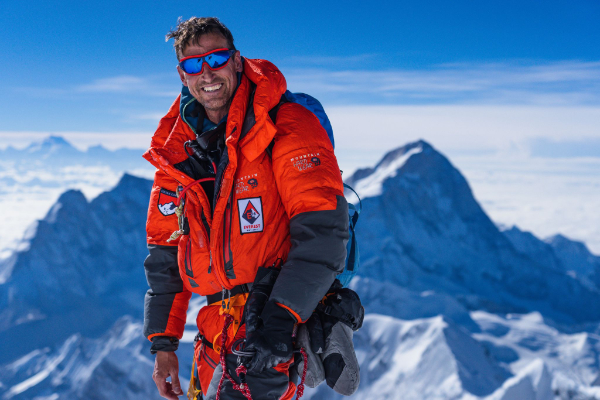 Kenton Cool is one of the world’s leading high-altitude climbers, an avid adventurer, a mountaineer, and a highly engaging and inspiring speaker.

Kenton holds the record for non-Sherpa summits of Everest, having summited the world’s highest mountain an astonishing 16 times.

He has climbed extensively all over the world – establishing new routes and first ascents on peaks in Alaska, Europe and India.

It marks a far cry from Kenton’s early climbing career, which was thrown into jeopardy when he “failed to defy gravity” during a climbing accident in Wales, which broke both of his heels and legs. Kenton Cool said: “I was in hospital for four weeks, then spent four months in a wheelchair. The doctor told me I would never walk again without using a cane. I didn’t want to stop being part of the climbing community, so I was determined to prove him wrong. So, I learned to walk again – I was too scared of failure.”

Broadcaster and adventurer Ben Fogle, who Kenton guided to the summit of Everest in 2018 added: “Kenton is one of the all-time greats.

His climbing record speaks volumes of his ability, dedication, and skill. I couldn’t have climbed Everest without him.

“To climb Everest once was a trial – to climb it 16 times is heroic.” Kenton is one of the world’s most sought-after mountain guides and is known as ‘The Everest Leader’.

With survival as the ultimate goal, he is the one calling the shots, making time and safety-critical decisions that others are unwilling, or unable, to make.

Alongside this, he is also the man that aims to fulfil the lifelong summit dreams of others – “It’s far easier to take risks and succeed if you have a safety net, Kenton is that safety net”.

As a strong advocate of elevating levels of safety via a bold approach to an ascent, Kenton’s unique style on the mountain has seen unrivalled summit and commercial success for more than 15 years
“Stepping into dangerous environments compels us to change the lens through which we view our existence and our survival.

We think more broadly and creatively, we operate with more confidence and certainty, we don’t waste time. Crucially, it gives us the opportunity to develop pathways and approaches that previously were unfamiliar to us. This invaluable mindset should not solely live at the top of a mountain, the far-reaching gains clearly translate to other operational environments”.

Kenton has the rare ability to encourage individuals and teams to move beyond their perceived ‘tolerance level’.

Be this in a storm on the higher reaches of Mount Everest, testing their very survival, or in a professional environment where the goal might be streamlined productivity, results-driven collaboration or elevated commercial success rates.

For Kenton, the setting is simply the context, success comes from ‘flawless execution’ – “His motivation is relentless and Kenton’s ability to push boundaries in the world of mountaineering are legendary, now he is pushing others to achieve their own new levels”.

Each session is complemented with an awe-inspiring collection of photographs and video footage from his expeditions around the world.

Kenton is able to deliver keynotes on a variety of different subjects, including but not limited to: