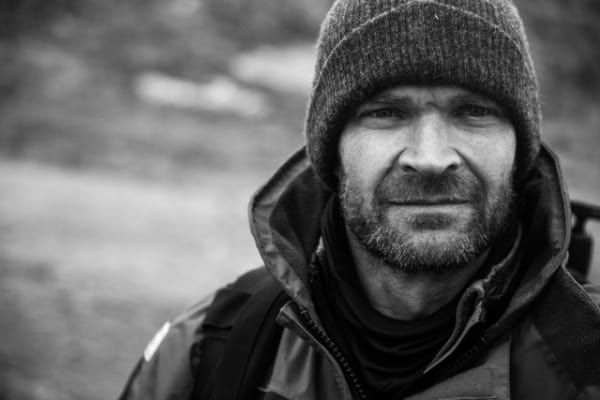 A former Royal Marines Officer who worked for Nelson Mandela during the peace process in the early nineties, Monty left the forces to pursue a career in expeditions, travel journalism, and marine biology.

Monty has since led teams in some of the most challenging environments on Earth, presented numerous multi-award winning documentaries, launched his own production company, and become a renowned inspirational speaker and writer.

He has also developed a one-of-a-kind leadership and team building system for the professional and education sectors.

Monty is a President of the Galapagos Conservation Trust, the Durrell Wildlife Foundation, a Help for Heroes patron and numerous conservation organisations.
TV history;
Monty is best known for his three hugely popular BBC series ‘Great Escapes’, where he lived on the west coasts of Scotland and Ireland with his dog Reuben.

Monty went on to present the multi-award winning BBC NHU blue chip series ‘Great Barrier Reef, The Fisherman’s Apprentice, again for the BBC as well as series for Discovery and Channel 5.

Since starting his own production company Seadog Productions, Monty has produced and presented three series for Channel Four. “WWII’s Great Escapes: The Freedom Trails” broadcast to critical acclaim in late 2017 and in 2018 the whole Halls family featured in a poignant conservation mission to the Galapagos for “My Family and the Galapagos”.

The family revisited the islands in 2019 – and a four part prime time series aired in early 2020 documenting their time there.

Seadog has just aired its fourth series, exec-produced by Monty all about the Royal Marine Commandos for BBC Two.

Monty has written several books, and is a regular contributor to magazines and newspapers, many of them communicating his enthusiasm for the natural world.

Monty’s Themes for His Talks

A high octane journey through three decades of exploration, adventure, and working with diverse communities throughout the globe. This is a talk backed up with world class images, footage from Monty’s award winning adventure and travel documentaries, and tales of pure adrenaline and wonder from every environment imaginable. The talk was described by Sir Ranulph Fiennes as “a brilliant presentation, one that shows that exploration and adventure still exists in the modern world.”

From a career in the Royal Marines, to being part of a military group assisting Nelson Mandela, to leading teams in some of the most demanding and kinetic environments on earth, Monty Halls knows about change. This presentation is a unique perspective that explores our reactions to change, describes methods of making the most of the opportunities it presents, and galvanises audiences jaded with the usual messages of from motivational speakers. This is a talk based on genuine experience, with real take-home messages and models. Client Aurum Holdings noted “Nothing could have prepared us for the impact he created on the day. He totally captivated the audience with his speech.”

From the rarified world of Commando Forces, to International expeditions with diverse teams, and working with elite sports teams and businesses facing challenges and change, Monty has delivered leadership talks and events across a vast spectrum. The key to the success of these events is making the content thought provoking, allowing the participants to generate and air their own thoughts on effective leadership. This acknowledges that every business, every environment, and every individual is different when it comes to effective leadership. And yet the same over-arching principles apply!

Therein lies the great mystery of leading well – Monty explores these themes based on decades of experience with diverse organisations. “In two decades of working for Travis Perkins, that’s the best leadership event I’ve ever attended.” Travis Perkins delegate, 2017.

Monty is President of the Galapagos Conservation Trust, a Global ambassador for the Durrell Wildlife and Conservation Trust, and a highly respected figure in the world of environmental and natural-history programming. This talk not only explores the challenges that face us all in environmental terms, but also offers solutions on a personal and corporate level. It answers that crucial question “What can I do?”, and is an upbeat, positive approach to the issues that face us all as global citizens. “Exactly right, your talk was exactly right. It left us all feeling energised and motivated about what we could actually do. Many thanks.” Delegate from Coastal Futures Conference 2021.

Creating a coherent team or project group can be a challenge, Monty Halls has done this for three decades, whether as a Royal Marines Officer, a leader of diverse expeditions to environments throughout the globe, or with businesses and elite sports teams. The key is to make the process dynamic, enjoyable, and engaging. The end result is a presentation and a process that explores the capabilities of any team, that celebrates their diversity of skills, and establishes a clear culture and ethos. Gloucester Rugby Club described their package with Monty as delivering “precisely what the brief required. Taking us out of our comfort zone, but at the same time making it enjoyable and worthwhile. The team members – many of them experienced internationals – noted that it was one of the best packages they’d ever attended.”