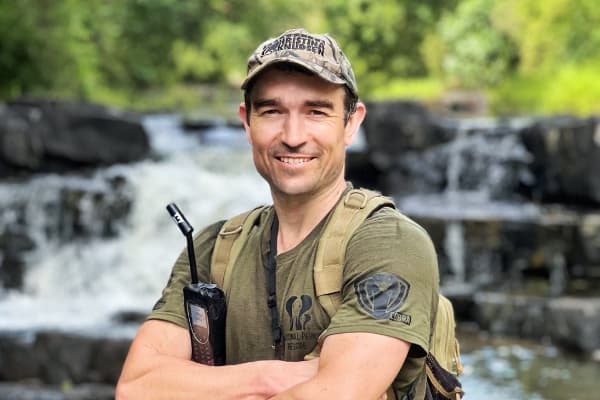 Dr Niall McCann is a National Geographic Explorer focusing on anti-poaching and the illegal wildlife trade, with ongoing projects in Africa and Latin America.

Niall is a seasoned adventurer who has rowed across the Atlantic Ocean, skied across Greenland, cycled over the Himalayas, and been on multiple rock climbing and mountaineering trips around the world.

He is also an award-winning wildlife TV presenter with shows on the BBC, PBS, Animal Planet Canada,

Nat Geo Wild and the Discovery Channel, most recently with a strong focus on climate change and human-wildlife conflict.

Niall has a PhD in Conservation Biology and has led biological research expeditions in jungle environments for the past 20 years.

Niall is the Conservation Director for National Park Rescue, a direct-action conservation organisation protecting some of the most threatened national parks in Africa, and is co-Chair of the global EndPandemics Alliance.

In addition to his day-to-day work in conservation, Niall lobbies the UK government to put conservation and the environment at the heart of their International Development Aid strategy, and is involved in multiple projects at the nexus between innovative finance and conservation.

Niall had a fulsome adventure career, apparently cut short when he broke his back in a speedflying accident in 2016.

After learning how to walk again, he joined the Mountain Rescue team that rescued him, and continues to pursue adventure and exploration around the world, despite the ongoing effects of a spinal cord injury.

Outside of work, Niall is a Trustee of the Royal Geographical Society and the Wallacea Trust, an Ambassador for the British Inspiration Trust and Smash Life, an active member of the Brecon Mountain Rescue team, and is an avid outdoor enthusiast.

The two themes Niall speaks on are:

Climate change, biodiversity loss, etc. There are obvious themes of leadership, personal responsibility, personal fulfilment, etc, as well as being a rip-roaring tale of adventure.
He’s delivered this kind of talk to a wide range of audiences including major businesses interested in climate and the green agenda.

Major adventures (oceans, icecaps, mountains), leading up to me breaking my back, learning how to walk again and joining the Mountain Rescue team that saved him.
There are obvious themes of leadership, resilience, giving back, etc, as well as all the adventure and excitement you’d expect from a multi-sport adventure talk! Like the first talk, he’s given this kind of talk to a wide range of audiences including medical specialists, businesses and the police.