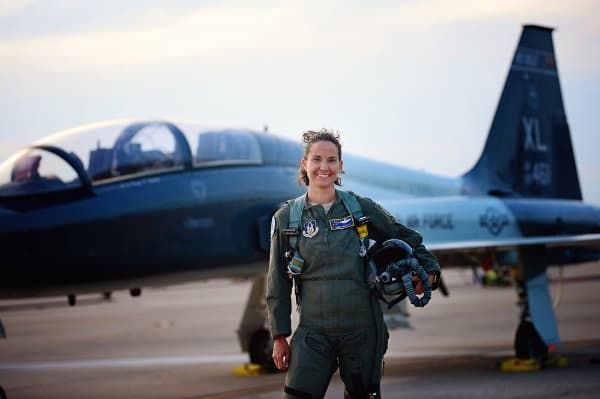 Tammy Barlette is a retired Lieutenant Colonel and fighter pilot.

A Minnesota native, with no ties to aviation, she grew up with a heart to serve her country, and that is just what she did.

She joined Air Force ROTC at the University of Minnesota and the possibility of becoming a pilot was presented to her for the first time; that is where her love of aviation began.

Tammy completed Specialized Undergraduate Pilot Training in April of 2000, and upon graduation was immediately assigned to be an instructor in the T-37.

After training hundreds of students the skills of aerobatics, instruments and formation, she then moved on to fly the mighty A-10 Warthog, where she completed a remote tour to Osan Air Base, Korea.

After an aircraft injury required cervical spine reconstruction, Tammy transitioned to the Arizona Air National Guard. She flew the MQ-1 Predator and the MQ-9 Reaper, accumulating over 1500 hours of combat support time in both Iraq and Afghanistan assisting and protecting troops on the ground, providing real-time reconnaissance and lethal support. During this time Tammy also graduated from the prestigious US Air Force Weapons School.

Desiring to get back into a high-performance aircraft and having a passion to teach, Tammy then transitioned to the Air Force Reserves, instructing in the T-38 Talon for the last 6 years of her 20-year military career.

Her focus was on balancing family life as a married mother of three with instructing in the fast-paced environment of the Air Force’s premier fighter trainer. She excelled at both, earning multiple awards, and spearheading new programs to mentor and grow professional aviators.

Additionally, while working full time, running a business, and raising three kids, she earned her Master’s in Christian Ministry.

Tammy and her husband, who is a federal agent, currently reside in Tucson, AZ with their three children.  She retired from the Air Force in 2018 after 20 years of service, becoming a professional speaker, and also founding Athena’s Voice, a women veteran speaking collective  featuring female military pilots with powerful stories to tell.  She is also a mindset and performance coach who specializes in working with aviators, helping them feel more confident in the cockpit.

A Mission Focused Mindset: How to avoid bailing out when circumstances get tough.

Tammy Barlette, retired Lieutenant Colonel and Air Force fighter pilot, shares her stories of triumph, struggle, and courage, highlighting the importance of a mission focused mindset. Facing her fair share of challenges as one of few women (often the only), Tammy earned her place among the “bros” of the fighter pilot world.

Although her achievements speak for themselves, the road to success was not an easy one. A mission-focused mindset requires hard work and laser focus, all while battling the ever-present enemy of self-doubt. Learn how to shift your focus away from challenging circumstances and see the big picture, despite the obstacles and trials you may face.

Just like bailing out of a jet is a last-ditch effort, learn how to approach life’s challenges with that same tenacious mindset.