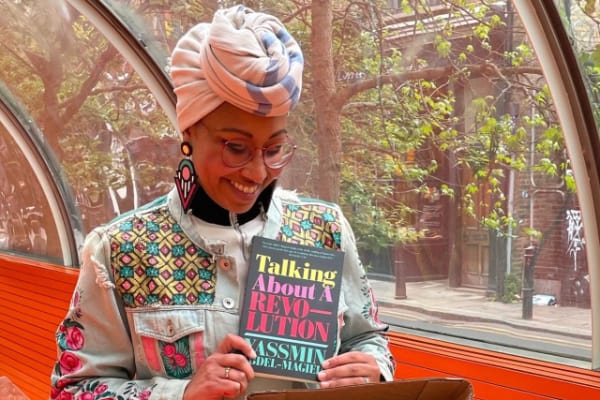 Yassmin has published four books, written two plays and is currently developing a number of projects for screen.

In non-fiction, Yassmin writes on politics, technology and culture, exploring how we can collectively build a more just world.

In her fiction and scripted work, Yassmin enjoys examining rich, complex themes and centering Black Muslim women (with a healthy dose of humour!).

An award-winning speaker and globally sought-after advisor on issues at the intersections of race, gender and faith, Yassmin has delivered keynotes and workshops in 25 countries in Arabic, English and a smattering of French.

She founded her first organisation, Youth Without Borders, at the age of 16, leading it for nine years before co-founding two other organisations focused on serving women of colour.

Yassmin is currently a Trustee of the London Library and Stakeholder Committee Chair with the Black Writers Guild.

Her TED talk has been viewed over 2.5 million times and recognised as one of TED’s top 10 ideas.
In all her work, Yassmin is an advocate for transformative justice and a fairer, safer world for all.

An outstanding, inspirational, insightful, connected, topical and learning laden presentation. You are the best keynote we’ve ever had.

The first time I saw Yassmin present I was hugely impressed. Speaking to an dominantly white, middle aged male audience from the petroleum industry, Yassmin spoke about inclusiveness and diversity and blew them away. She won over a potentially sceptical audience with personal stories, charm, warmth, humour, and importantly, a gentle provocation that simply gets individuals to consider why we think the way we always have, and do we need to reassess. She makes a difference!