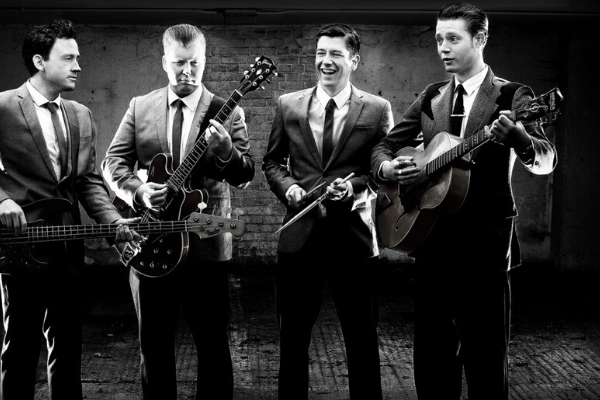 The Bluejays are available for hire worldwide, 365 days a year! ” Book the UK’s best 1950s Rock and Roll Tribute band for any event worldwide. Pack the dancefloor of your private party, wedding, corporate, festival, Back To The Future themed night with the finest vintage entertainment available.

The group formed in 2013, after years of performing together in West End rock ‘n’ roll theatre shows such as ‘Buddy – The Buddy Holly Story’, ‘Million Dollar Quartet’ and ‘Dreamboats & Petticoats’. The band created the show which is touring UK theatres throughout 2019. In 2017, The Bluejays were invited out to Lubbock, Texas to play for Buddy Holly’s family.

They were joined on stage by Buddy’s wife María Elena Holly who sang backing vocals during their covers of his music during their show in 2018. ‘Part-time Bluejays’ include Brian May of Queen who joined the band for a cover of Johnny B. Goode when they played his daughter’s wedding.

The Bluejays’ set is made up of hit after hit from the likes of Elvis Presley, Eddie Cochran, Chuck Berry, Buddy Holly, The Everly Brothers, Gene Vincent, Little Richard, Ritchie Valens, Dion and many more and is guaranteed to have audiences of all ages up and dancing all evening.

Here's the band's full repertoire of songs below.

A Teenager In Love – Dion & The Belmonts

All I Have To Do Is Dream – The Everly Brothers

All Shook Up – Elvis Presley

At The Hop – Danny & The Juniors

Do You Love Me? - The Contours

Do You Wanna Dance? – Bobby Freeman

Early In The Morning – Buddy Holly

I Fought The Law – The Crickets

I Got A Woman – Ray Charles

I Put A Spell On You – Screamin’ Jay Hawkins

Let’s Have A Party – Elvis Presley

Lipstick On Your Collar – Connie Francis

Move It - Cliff Richard & The Drifters

Not Fade Away – Buddy Holly & The Crickets

Only You – The Platters

Rip It Up – Little Richard

Rock Around The Clock – Bill Haley & His Comets

Rock Around With Ollie Vee – Buddy Holly & The Crickets

Santa Claus Is Back In Town - Elvis Presley

Shakin’ All Over – Johnny Kidd & The Pirates

That’ll Be The Day – Buddy Holly & The Crickets

The Young Ones - Cliff Richard & The Shadows

Too Much Monkey Business - Chuck Berry

When Will I Be Loved – The Everly Brothers

Who Do You Love - Bo Diddley

You Can’t Catch Me – Chuck Berry

You Never Can Tell – Chuck Berry