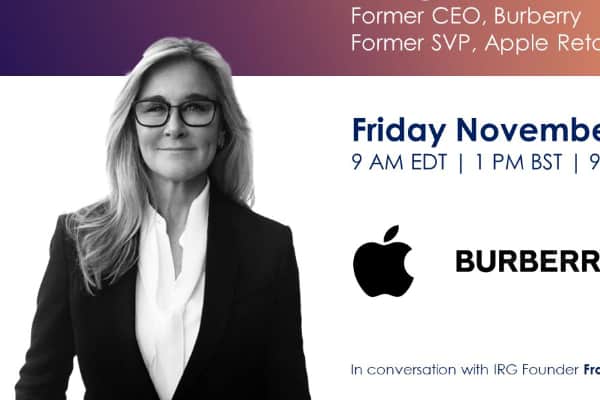 Angela Ahrendts is a top business keynote speaker and was Apple’s Senior Vice President of Retail and Online Stores.

Joining Apple in 2014, Anrendts was responsible for the operation and expansion of Apple retail and online stores, which have redefined the shopping experience for hundreds of millions of customers around the world.

Joining Apple in 2014, Anrendts was responsible for the operation and expansion of Apple retail and online stores, which have redefined the shopping experience for hundreds of millions of customers around the world.

Before Apple, Ahrendts was the Chief Executive Officer of Burberry, the global luxury company distinguished by its 155-year British heritage and iconic outerwear.

Under the leadership of Ahrendts and the executive team, the development of a pure brand strategy has driven the company’s global growth, realized through international retail expansion and innovation in product design and digital marketing.

During her time at Burberry, the Group’s revenues more than doubled and Burberry is now widely regarded as one of the leading British brands in the world, with a thriving, connected corporate culture.

In 2008, with Chief Creative Officer Christopher Bailey, Angela Ahrendts established the Burberry Foundation, dedicated to helping young people realize their dreams and the power of their creativity through financial, mentoring and product support.

She was previously CEO of Burberry Group.

During her tenure here, the company value rose from £2 billion to over £7 billion.
Prior to Burberry, she was executive vice president at Liz Claiborne Inc., and earlier in her career she served as president of Donna Karan International.

Angela holds a Marketing and Merchandising degree from Ball State University in Indiana, where she was awarded an honorary doctorate in 2010.

She is also a member of the UK’s Prime Minister’s Business Advisory Council and was named honorary dame commander of the British Empire in April 2014.

She was also featured in Forbes’ 100 Most Powerful Women in the World, Fortune’s Businesspeople of the Year, and the Financial Times’ Top 50 Women in World Business. Angela is a board member at Airbnb.

The gadget giant created the role for her; she’s the first woman on Apple executive team and has been the highest-paid executive, earning almost double of what CEO Tim Cook makes.

Across this time she gained a formidable reputation for successfully diversifying and expanding brands whilst growing theirreputation internationally.

Since joining Burberry in 2006 she has deployed her trademark vigour to revitalise the ailing British giant.

During her seven year tenure she has successfully doubled sales and turned Burberry around to generate annual revenues of over £1.8 billion.

Her rapid response restructuring during the early days of the financial crisis led Burberry to outperform every other UK company in 2009, and continue to grow to the largest luxury goods maker in the UK and amongst the top five globally.

Angela is also a keen advocate of technology and social media, which she has made core to Burberry’s marketing strategy.

The company maintains an active Facebook and Twitter accounts with over 15 million fans and 2 million followers respectively.

An early teaser for the Spring/Summer 2013 range hit over 1 million views on YouTube in 48 hours.

Angela has overseen Burberry’s great success in Asian markets, especially Hong Kong and Mainland China, which the company confidently predicts it will grow to £480 million worth of business into late 2013.

She was awarded a DBE for her services to British business in 2013.