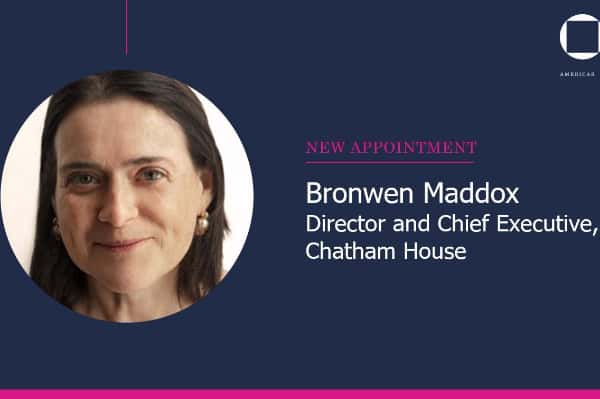 Bronwen Maddox is the Director of the Institute For Government, a post she took up in September 2016, and a speaker on global politics.

A leading independent think tank, she works to promote better government by focusing on how it is led, how decisions are made and how it is scrutinised.

From 2010-16 Bronwen was Editor and Chief Executive of Prospect, a leading monthly current affairs magazine.

Prior to that she was Chief Foreign Commentator, Foreign Editor and US Editor of The Times, supervising its award-winning coverage of September 11, 2001.

She was previously at the Financial Times, where she ran award-winning investigations and wrote economics editorials.

Before becoming a journalist, she was an investment analyst in the City and a Director of Kleinwort Benson Securities, where she ran its highly-rated team analysing world media stocks.

She has a degree in Politics, Philosophy and Economics from St John’s College, Oxford.

She is a member of the Governing Council of the Ditchley Foundation which fosters transatlantic relations, and a non-executive board member of the Law Commission, the public body which recommends reform of laws in England and Wales.

Bronwen’s distinguished career in journalism, combined with her background in the City, have made her an authority on the interaction between global political trends, finance and business.

She has led two highly-regarded institutions focused on current affairs, re-shaping them to meet the demands of commentary and analysis in the the 21st century.

With superb clarity and incisive analysis, she covers a wide range of issues in detail – from the dynamics of Westminster to Trump and the rise of Asia.

She is also a seasoned interviewer and moderator, having interviewed global figures such as Henry Kissinger, Jimmy Carter, Vladimir Putin and Tony Blair.

In her first lecture as Director of the Institute For Government, Bronwen examines the challenges of governing a country in 2017.

Theresa May presents a big vision, but little policy