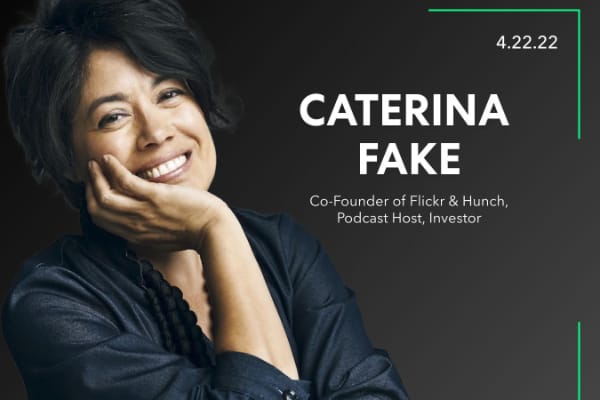 Caterina Fake is a pioneer of independent businesses, as the Chairwoman of Etsy she has produced a platform specifically for small creators to thrive.

When booked for events, Caterina discusses with audiences her incredible career journey, including the process of co-founding Flickr in 2004 and Hunch in 2011.

Listed on Time magazine’s Time 100, she is greatly respected for her industry leading knowledge at events, fuelled by her comprehensive understanding of digital branding, blogging and marketing.

When booked for events, Caterina is a true joy to witness present live. For those in attendance, she provides expert strategies for business success, from the perspective of a digital leader.

Due to her extensive experience, Caterina has gained a wealth of knowledge on algorithms and social networking, topics that she discusses as an industry speaker.

She is the ideal business speaker for corporate audiences, as her passion for entrepreneurialism inspires guests to hone their own brands.

As an independent business woman, Caterina taught herself about the internet, learning through trial by fire how to design websites.

In 1997, remaining in digital roles, she managed forums for Netscape, aided by her knowledge of online communities.

In 2002, Caterina co-founded Ludicorp, which later developed the multiplayer online game, Game Neverending. Following its creation, Caterina started working on Flickr in 2004, which in a matter of years became one of the world’s most popular photo sharing websites.

In 2014, Caterina created Findery, an online directory for local knowledge, allowing users to interact with the world around them through geography tags.

She is also on the Board of Directors for Creative Commons and the Sundance Institute Board of Trustees, a testament to Caterina’s industry-wide respect.

In celebration of her contribution to business, Caterina was awarded the 2005 Businessweek’s Best Leaders, Red Herring’s 20 Entrepreneurs under 35 and the 2018 Visionary Award from the Silicon Valley Forum.