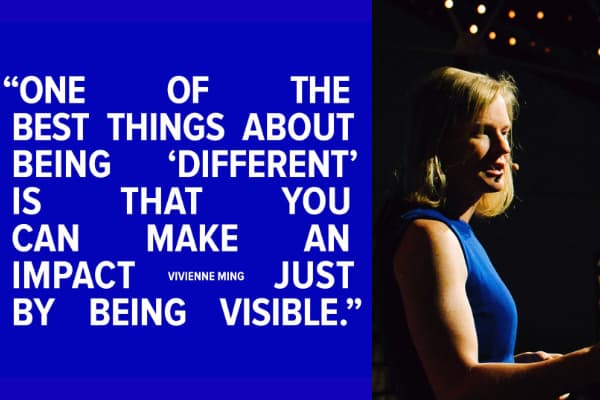 She also examines aspects of leadership, inclusion, creativity and health to look at the personal and collective impact of technology, and considers ideas like how education and skills, rather than the advance of AI, will be the key to understanding the future of work and society.

Vivienne Ming is a neuroscientist, entrepreneur, author and co-founder of the think-tank Socos.
A former visiting scholar at UC Berkeley’s Redwood Center for Theoretical Neuroscience, Vivienne specialises in artificial intelligence systems that improve healthcare and children’s education and learning.

She also looks more widely at the many ways technology can improve life and work, as well as barriers, abuses and problems bias and the imperfect use of data can bring.
Socos Labs conducts research into AI, behavioural economics, neuroscience and education, exploring how the future of technology could change human potential.

Vivienne has invented an AI system to help treat her diabetic son; a system to predict manic episodes for people with bipolar disorder; and a facial recognition system to reunite orphaned refugees with extended family members.

She has also created other machine learning tools to help children develop their creativity, motivation and emotional intelligence.

Vivienne looks at the connection between creativity, technology, economics and neurology. She examines everything from the future of work to innovation to neuroprosthetics, and how AI can be used to create more inclusive economies and improve opportuinties.

Vivienne also considers the sociology of technology and the wide ranging effects it can have in politics, communities and for personal identities.

From concepts of inclusion and diversity to purpose and culture, she offers personal and professional insights into the problems that need solving, and why technology should be understood as a tool for human solutions rather than a solution in itself.

Vivienne became a Junior Fellow at Stanford University’s Center for Mind, Brain and Computation after completing her PhD in Computational Neuroscience and Psychology.

She then co-founded Augniscient Inc, a research organisation focused on measuring the engagement between people and technology.

After selling her company, she worked as Chief Scientist for various startups, until moving towards advisory and consultancy roles for a range of organisations and NGOs, including Credit Suisse and Accenture. She is an advisor and board member of several startups working in areas including venture capital, recruitment and AI.

Widely noted for her ability to put complex and often challenging ideas into accessible, engaging language, Vivienne has appeared on BBC Radio 4 and Radio 1, and NPR in the US, and was ranked in the BBC’s 100 Women of the Year as well as the Financial Times’ LGBT leaders and allies of today.

She has also been featured in the Financial Times, The Atlantic, The Guardian and The New York Times.