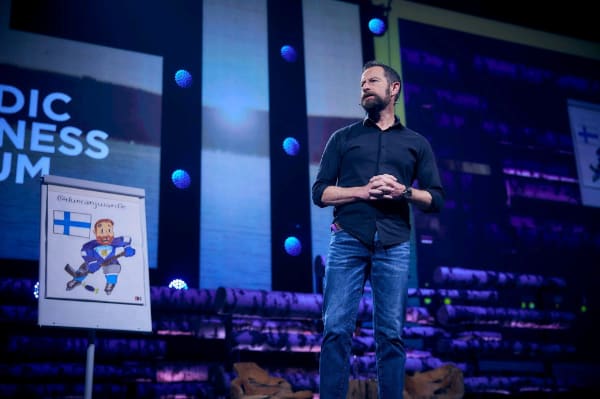 Embedding a Culture of Innovation Into Everyone’s DNA

Leading A.I. expert Kai Fu Lee has suggested that upwards of 40% of current jobs could be replaced by Artificial Intelligence within the next 15 years. 40%!

So, how we will compete in the next decade?

What skills will we need to survive in a decade of total disruption and rise in A.I.? Simple.

Businesses that will win will be those that leverage the most impactful human traits that A.I. won’t be able to replicate (at least not for the foreseeable future): Creativity, Intuition, Curiosity, & Imagination.

As Head of Innovation and Creativity at Disney for the last decade Duncan Wardle learned that there is a huge gap in the market.

CEO’s everywhere would look to us – The World’s Most Creative Company – for guidance on how to create a culture of innovation, and provide their organization with the tools needed to leverage their most important asset: their people.

But here’s the challenge: until now, no one has made innovation tangible.

Many companies hire an Innovation consultancy or build an “Innovation Department,’ only to find that they have not truly driven cultural change and embedded innovation across the entire enterprise.

What if instead, there was a Design Thinking Innovation Toolkit?

One that everyone could use that makes creativity tangible, innovation easy, and the process enjoyable?

That’s exactly what Wardle has built leaning on years of experience at Disney, and exactly what he’ll share with your audience as part of his Embedding a Culture of Innovation into Everyone’s DNA presentation.

The Theory of Creativity

The ability to think creatively is the one core human truth that will remain relevant in the brave new world of Artificial Intelligence.

Thankfully, Duncan Wardle believes everyone has the power to be creative.

But wait, haven’t we all been told at one point or another that we’re not the “creative type”?
That we should leave the creativity to the “Creatives”?

For most of us, this has happened so many times that we end up actually believing it. For adults, not being creative is an accepted fate.

But weren’t we kids once? Turning boxes into spaceships and pillows and blankets into forts and castles?

What happened to that creativity? Well, with an education and corporate structure that encourages finding the single “right answer” to every question, we are trained to fall in line, and shut down that creative portion of our brain.

Fortunately, that childhood creativity did not dissipate – it’s just lying dormant, waiting to be brought back to life. And those that are able to access it – the Edisons’ and Einsteins‘ and Disneys’ and Jobs’ of the world – are the ones that are able to drive massive creative disruption through major new theories and industries.

So, how can you embed a sustainable culture of innovation and creativity throughout your organization, and encourage every employee to think creatively? Let Wardle show you with his Theory of Creativity keynote.

Leaning on 25 years with the Walt Disney Company, most recently as Head of Innovation & Creativity, Wardle has designed a tangible Innovation Toolkit that everyone can use to “Think Different” and solve real challenges in the marketplace by leveraging their creative mind.

By the end of his talk, your audience will walk away with a series of unique Creative Behaviours and Innovation Tools that will allow them to deliver revolutionary thinking and drive substantial results in all areas of your business.

Disney’s ability to redefine and dominate nearly every industry it has ever entered is no coincidence.

The continued success of Disney has been driven by a foundational trait of the company that goes all the way back to it’s founder, Walt Disney, who was merciless in his pursuit of innovating the customer experience.

By viewing all major business decisions as a customer experience decision, The Walt Disney Company continues to find innovative ways to engage consumers around the world, both old and new.

And these innovative experiences have created one of the most passionate, loyal fanbases of all time.

So, how does Disney Think Different and leverage creativity to innovate the customer experience?

Through several specific tools and examples, Wardle will share this information with your teams during his Delivering Customer Experience Magic keynote.

You’ll learn from the following examples:

By simply re-expressing the industry challenge Walt Disney created a level of hospitality that has never been replicated.

How by challenging the rules of the industry, Walt came up with the biggest creative solution of the twentieth century.

And How instead of asking ourselves How We Might make more money, by asking how my we address the biggest consumer pain point we created record revenues at Disney.

Do you ever wonder why most of your best ideas come to you in the shower, during your commute, while falling asleep, or some other unexpected place? Have you ever pitched a new idea, only to watch it get diluted or killed as it moves through the processes? Ever wanted to know how Walt Disney came up with the idea for a Disneyland or how Netflix completely revolutionized the movie rental industry?

In his over 25-year career at the world’s most innovative organization – The Walt Disney Company – Duncan Wardle learned many important things about building a profitable business and winning creative culture.

The most important? If you want to be different, you have to Think Different!

Leaning on his experience as the Head of Innovation & Creativity at Disney, Duncan’s Think Different keynote takes audiences on a journey. Throughout this journey, they’ll be given a unique set of Innovation Tools and Techniques.

These include the breakthrough “What If” creative thinking tool, made famous by Walt Disney himself, who used it to pivot his company from simply an animation house to an entertainment and theme park pioneer.

After this immersive crash course from Duncan, your organization’s ability to mine for creativity and innovation will be drastically improved.

In the end, your audience will leave with an actionable set of Creative Behaviors and Innovation Tools that will immediately foster a culture of innovation and creativity in your company.