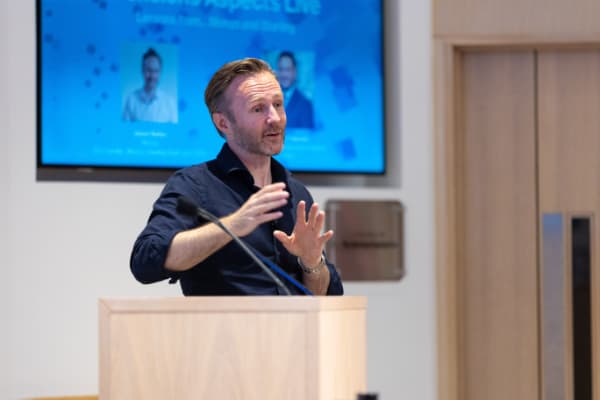 As one of the key figures behind two of the most successful digital banks in the UK, Jason has a wealth of lessons in the behaviour of a new generation of banking customers as well as the challenges incumbent businesses face. He also looks at the pitfalls of digital transformation, how to innovate and create new products, and what the future of banks and money looks like.

Tech entrepreneur, Jason Bates is the co-founder of Monzo and Starling Bank, two of the most successful and revolutionary financial services companies of recent times. He now leads his own fintech consultancy and is one of the presenters on the podcast, FinTech Insider which covers everything from digital banking and consumer behaviour to the future of blockchain and cryptocurrencies.  At the mobile-only challenger bank Starling, Jason led product development and directed its brand and marketing. During his time at the company he met the team with whom he would later go on to pioneer a new digital bank, initially naming it Mondo. It raised £1 million in 96 seconds, becoming the quickest crowd-funding campaign in history. The team launched a later campaign, reaching the target investment of £20 million within 3 hours.

As Chief Customer Officer of Monzo, Jason built the design of the award-winning app and led the regulatory applications for the bank.  Monzo’s success was largely due to the loyalty it cultivated with its users, with referrals drawing in 80% of the company’s business. Monzo’s innovative and revolutionary structure disrupted traditional banking by establishing a new way of interacting with clients and getting younger people more interested in their finances.

As part of his fintech consultancy, Jason advises companies on developing their mobile platforms, and targeting different markets. He also guides financial services on driving digital transformation, analysing where innovation is meeting banking, and how to process and implement change successfully.Jason considers how digital banking will evolve, the part AI will play, and the impact it will have on both consumers and those they’re buying from. He discusses leadership in an era of cultural change, overseeing the next digital shift and creating products that accelerate and embody the future of consumer behaviour.