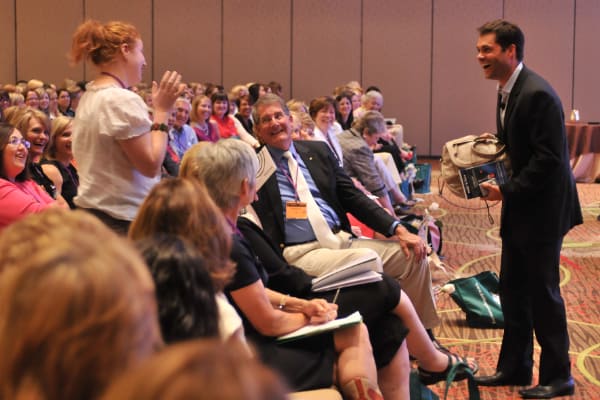 John Sileo lost his multi-million-dollar startup, his wealth, and two years of his life to cybercrime.

It began when a hacker electronically embezzled from the company’s clients using John’s identity. John was initially held legally and financially responsible for the felonies committed.

The losses not only destroyed his company and decimated his finances, but consumed two years of young fatherhood as he fought to stay out of jail.

But John’s story has a happy ending and has become a worldwide catalyst for change.

Since being found innocent of all crimes (and the real hacker put in jail), John has made it his life’s work to share hard-earned wisdom as a cybersecurity expert, award-winning author, 60 Minutes guest, and keynote speaker.

His happy clients range from the Pentagon to Amazon, small associations to enterprise organizations.

His mission is to keep others from becoming the next disastrous data breach headline. John specializes in the human elements of cybersecurity and uses disarming humor, audience interaction, and cutting-edge research to keep his training relevant and entertaining.

John is President & CEO of The Sileo Group, a Colorado-based technology think tank, and serves on a variety of boards.

Cybersecurity doesn’t grow from shinier tools but from the powerful intersection between human beings and technology.

John customizes security awareness training for leaders, associations, small businesses, and organizations working to infuse energy and ownership into their culture of security.

He uses story, humor, and audience interaction to make his message stick.

The Art of Human Hacking: Social Engineering Self Defense

Humans are not the weakest link in cybersecurity, unless you treat them that way.

By training your team to detect and deter manipulation tools exploited by cybercriminals and fraudsters, you eliminate the hacker’s primary weapon.

Speeches include a highly entertaining and instructional live iPhone hack.

Every move you make in the digital world can be tracked, hacked, and exploited. In the information economy, your data literally defines you.

John customizes these speeches for individuals seeking to defend their financial, health and private information.