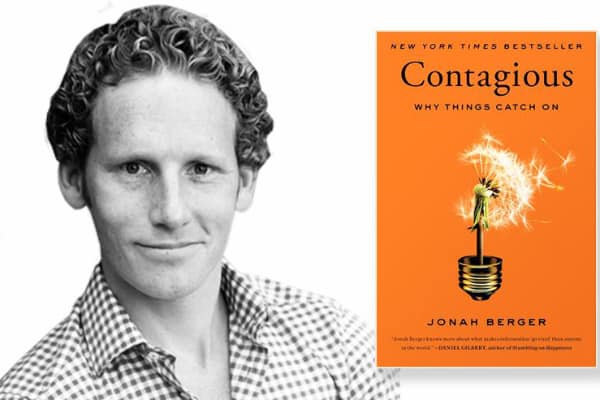 Jonah Berger is a marketing professor at the Wharton School at the University of Pennsylvania and internationally bestselling author of Contagious, Invisible Influence, and The Catalyst.

Dr. Berger is a world-renowned expert on change, word of mouth, influence, consumer behavior, and how products, ideas, and behaviors catch on.

He’s keynoted hundred of events, and often consults for organizations like Google, Apple, Nike, and the Gates Foundation.

Over a million copies of his books are in print in over 35 countries around the world.

The Catalyst: How to Change Anyone’s Mind

This book introduces a revolutionary approach to change. Successful change isn’t about pushing harder or exerting more energy. It’s about removing barriers. Overcoming resistance by reducing friction and lowering the hurdles to action. Discover the five hidden factors that impede change, and how by mitigating them, you can become a catalyst.

Ever wish you could be more influential? Be better at motivating yourself and others? Make smarter decisions and shape group opinion? This book will show you how. Invisible Influence spent more than three months on the New York Times bestseller list. It was also a Wall Street Journal and Washington

Post bestseller and has been translated into over 25 languages.

Contagious: Why Things Catch On

Reveals the secret science behind why products, services, and ideas become popular. Discover how six basic principles drive all sorts of things to catch on. If you’ve ever wondered why certain stories get shared, brands get more word of mouth, or videos go viral, this book will explain why, and show you how to leverage these ideas to craft contagious content.

Contagious was New York Times, Wall Street Journal, and Washington Post bestseller and has been translated into over 35 languages. Amazon named it one of the best books of the year and it received the Berry Book Prize from the American Marketing Association as the year’s best marketing book.