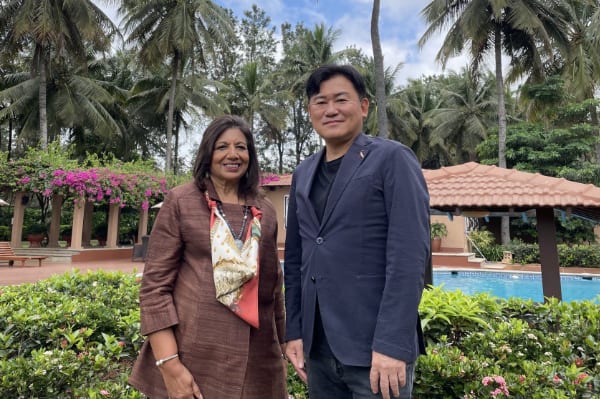 The world needs to move from a centralized, linear model of supply to digitally enabled, distributed supply networks that are closer to customers and markets.

A pioneer of the biotechnology industry in India and the head of the country’s leading biotechnology enterprise, Biocon, Ms. Kiran Mazumdar-Shaw is a highly respected businesswoman.

Ms. Mazumdar-Shaw, a first generation entrepreneur, has made her country proud with a globally recognized biopharmaceutical enterprise that is committed to innovation and affordability in delivering world-class therapeutics to patients globally.

Named among TIME magazine’s 100 most influential people in the world, she is recognized as a global thought leader for Biotechnology.

Under her stewardship, Biocon has evolved since its inception in 1978 from an industrial enzymes company to a fully-integrated, innovation-led, emerging global biopharmaceutical enterprise committed to reduce therapy costs of chronic conditions like diabetes, cancer and autoimmune diseases.

She has been recognized as the only Indian on Forbes’ list of ‘World’s Self-Made Women Billionaires.’

She has been featured in ‘The Worldview 100 List’ of the most influential visionaries by Scientific American magazine and named among the ‘100 Leading Global Thinkers’ by Foreign Policy magazine.

She has ranked No. 1 in the Business Captains category on ‘Medicine Maker Power List’ 2018, an index of the 100 most influential people across the globe in the field of medicine, where she has been among the Top 10, consecutively since 2015.

Most recently, she is elected as a full-term member of the Board of Trustees of The MIT Corporation, USA.

She presently serves on the Advisory Council of the Government’s Department of Biotechnology where she has been instrumental in bringing government, industy and academia together, to chart a clear and progressive growth path for Biotechnology in India.

She is also part of the Prime Minister’s Council on Trade & Industry in India and the US-India CEO Forum.

She serves as a Member, Governing Body and General Body of the Indian Pharmacopoeia Commission, an Autonomous Body of the Government of India.

She is also a member of the Union Commerce Ministry-instituted committee to advise the government on India’s export promotion strategy.

She is a member of committee of Indian National Corporate governance policy to prepare a draft for a concept paper.

She serves as a Member of the Eminent Persons Group of the Competition Commission of India, New Delhi. She’s also on the honorary Board of advisors of The National Society of High School Scholars (NSHSS), USA. Ms.

Shaw serves as a co-opted member on the new Board of governors of Indian Council for Research on International Economic Relations (ICRIER).

She is a founder member of the Society for the formation of “Institute for Stem Cell Biology and Regenerative Medicine”.