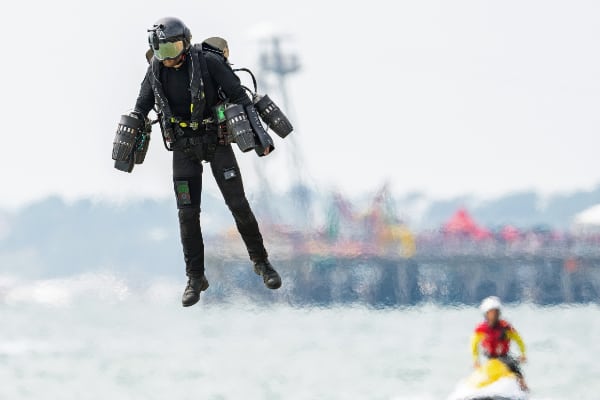 Gravity Industries designs, builds and flies Jet Suits, pioneering a new era of human flight. The company was founded in March 2017 to challenge the perceived boundaries in human aviation and to inspire others to dare to ask “What if?”. It now scales towards an International Race Series.

Prior to founding Gravity, Richard was a Royal Marines reservist for six years and an Oil Trader with BP for 16 years. He developed business in many countries including Azerbaijan, Mozambique, Russia and conducted trade relations with many more.

He discovered and implemented major new technologies in BP including turning a $30k groundbreaking trade flow analytics (ship tracking) platform still at the heart of the global commodity industry to this day. It won the BP Group innovation Award and generated in excess of $50m within 3 months. He has also been a key participant and investor in a number of successful start-up ventures externally and is a passionate STEM advocate.

Gravity has to date been experienced by over one billion people globally with Richard and his cohort of growing pilots completing nearly 100 flights around the world and speaking at dozens of events from TED Talks to XPrize.

When he is not flying around the world, Richard is in Salisbury with his wife Debbie and their two children, Oliver and Thomas, kayaking and camping amongst other things.