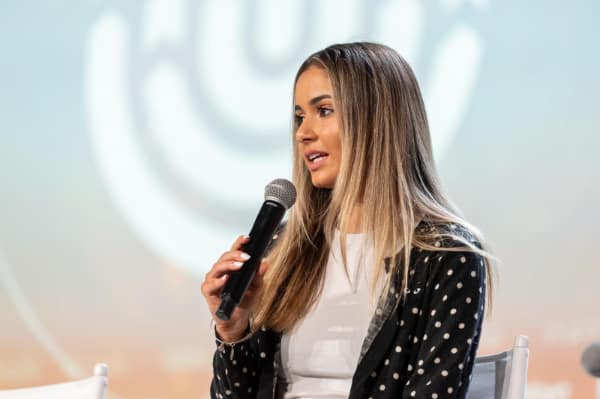 She is the founder and executive director of Climate Cardinals, an international nonprofit with 8,000 volunteers in 40+ countries working to translate climate information into over 100 languages.

She represents the U.S as the youngest member of the inaugural United Nations Youth Advisory Group on Climate Change.

Sophia’s work has been featured in news outlets including Forbes, CNN, Business Insider, BBC, NPR, ELLE, TIME Magazine, The Guardian, NBC, and even on the front page of The Washington Post.

She was previously a fellow with PBS NewsHour and has written for news outlets such as MTV News, Cosmopolitan, Refinery 29, and Teen Vogue.

She is a prolific public speaker and has spoken at universities across the country including Columbia University, UC Berkeley, Emory University, and Harvard University.

She gave her debut TED Talk as the closing speaker at the inaugural TED Countdown Conference.

She has been named VICE Media’s youngest Human of the Year, a National Geographic Young Explorer, and BuzzFeed’s youngest Woman to Watch.

Climate Cardinals is an international nonprofit working to make climate education more accessible to non-English speakers.
Through a network of 8,000 volunteers in 41 countries, we have translated and sourced over 500,000 words of climate information into 105+ languages.
We have also established notable partnerships with Translators without Borders, Radio Javan, Respond Crisis Translation, National Geographic, UNICEF, and UN Environmental Program.

Handpicked by UN Secretary-General António Guterres to represent the USA as the youngest of seven members on his inaugural Youth Advisory Group on Climate Change.
Organized a Global Youth Consultation and published a UN report with 6 key demands for world leaders.

Led a partnership with Climate Cardinals to translate the UNEP Youth #ForNature initiative into dozens of languages, enabling the effort to be the most widely distributed petition on planetary health.

The New Climate Podcast works to promote circularity, collaboration and accountability in fashion. Interviewed various leaders in the fashion industry from sustainability leaders at Lush Cosmetics and Mara Hoffman to politicians like Tom Steyer.

Sophia worked as an international spokesperson for Extinction Rebellion, a global environmental movement with the stated aim of using nonviolent civil disobedience to compel government action to avoid tipping points in the climate system, biodiversity loss, and the risk of social and ecological collapse.

Went viral for staging a hunger strike and sit-in at the Washington, D.C, office of Speaker of the House Nancy Pelosi.