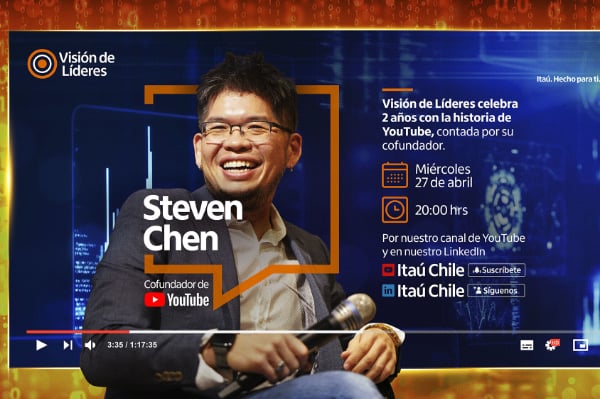 YouTube co-founder and technology speaker Steve Chen has changed the way we document the world and share our visions with others.

His resume includes some of Silicon Valley’s biggest names, and his entrepreneurial career is the stuff of legend.

As a keynote speaker, Steve Chen draws on an impressively varied career spent on the cutting edge.

In 2005, Chen, Chad Hurley, and Jawed Karim came up with a simple, efficient way to share videos online.

Less than a year after launching the site, the two had built it into a global phenomenon.
Soon after, Google purchased YouTube for $1.65 billion, and Chen continued to lead the platform’s growth.

With Google, Chen oversaw all areas of YouTube’s development, from engineering to product design and site operations.

As an engineer, he designed the massive data centers that make the service possible.

He also developed features that turned YouTube into a full-fledged social media platform and entertainment hub.

Chen’s personal story is as riveting as his list of professional accomplishments.

Born in Taiwan, he moved with his family to suburban Chicago when he was eight years old.

After graduating from the University of Illinois with a degree in computer science, he became one of PayPal’s first employees.

There he met Hurley and Karim before becoming one of Facebook’s early employees.

Having participated in the rise of two internet giants, Chen founded one himself just a few months after joining Facebook, and the rest is history.

Recently, in 2019, Chen won an Emmy award for lifetime achievement.

For years, Chen worked with Google Ventures, helping start-ups hone their business models and scale up. Today, Chen lives in Taiwan, where he lends his talents to developing the Taiwanese start-up ecosystem.

Within less than a year, the 3 founders of YouTube, Steve Chen included (the original CTO) sold the company to Google for the staggering amount of $1,65 billion dollars.

Hear this fascinating entrepreneurship story from one of the founders, Steve Chen.
Innovation & creativity

Steve Chen, co-founder and former CTO of YouTube, is one of the most innovative businessmen on earth.

In this keynote, he will talk about founding YouTube and how to come up with creative business ideas to innovate and disrupt the market.

YouTube’s Inside Story: What makes it so special?

From the first moment of its creation, YouTube co-founders Steve Chen and Chad Hurley were very clear that they wanted a very different user experience than what had been done in other similar portals up to that moment.

Their user experience was to be different, and it was very important that the upload could be done easily and quickly and that the way to share these videos was as easy as it could be.

As the founding CTO of the company Steve Chen will tell us how YouTube works inside, both from a UX point of view and also from the development of the company’s massive data centers and how they did it to create an experience so different from everything that existed in the market until that moment.